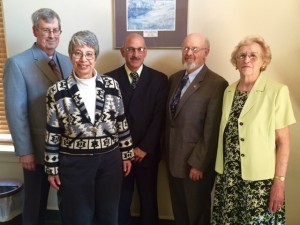 Lake Bancroft is located in downtown Ishpeming, with a city park and gazebo at its western end.  One of Ishpeming’s jewels, it has been undergoing progressive eutrophication – the enrichment of bodies of fresh water by inorganic plant nutrients – for over thirty years. Eutrophication typically promotes excessive growth of algae due to high levels of phosphates and nitrates. As the algae die and decompose, high levels of organic matter and the decomposing organisms deplete the water of available oxygen, causing the death of other organisms, such as fish. If this condition is not reversed, the lake will literally fill in with sediment and become a swamp. The Lake Bancroft Project aims to reverse the eutrophication process and reoxygenate the water, restoring and maintaining proper ecological health so that Lake Bancroft can be enjoyed for generations to come.

The Lake Bancroft Project’s engineered solution involves dissolving a food-grade polymer into the lake. The polymer binds to floating solids in the water, which then drop to the bottom of the lake resulting in clear water that reoxygenates.

A lake with healthy ecology will have oxygen-rich water several feet deep and a deficiency of oxygen at the lake bottom. In contrast, Lake Bancroft shows oxygen deficiency at a depth of only two feet. A current sample of Lake Bancroft shows suspended, floating solids, but if these solids were collapsed, the water would clear and reoxygenate.

Turbidity reduction is a chemical equation:

When the food-grade polymer binds to nutrients such as nitrogen and phosphorous, it removes them from the water. Without nutrients to support it, vegetative overgrowth shuts down and cloudy water becomes clear. The project aims to establish an aerobic zone of six to eight feet in depth which will perpetuate itself with minimal maintenance.

In the initial phase, the Lake Bancroft Project will pump 500 gallons of lake water per minute through 10”-diameter geotextile tubes. Pumps will be housed in a small, unobtrusive building at the end of the lake. The water will flow over and through polymer “logs” which will gradually disintegrate. The initial phase will be followed by a maintenance phase, in which the lake’s ecology will be monitored yearly and polymer logs will be refreshed as needed.